Home / Company / About Us

System Soft Technologies solves the problem of your limited IT resources hindering your ability to accomplish all your internal goals. We act as an extension of your IT team, providing everything from individual project support to complete IT function outsourcing in order to future proof your infrastructure. We invest heavily in innovative technologies and methods to enhance your agility, business value, and competitiveness.

Our focus is on building long-term client relationships. By becoming partners and trusted advisors, we have built a $125M+ company around understanding and anticipating their unique needs so they can achieve significant ROI ahead of schedule and below budget. The result?  Market success.

System Soft Technologies clients gain access to our pool of over 800 associates covering a full spectrum of expertise, the stability of an organization with over 20 years of success and very low client turnover, and a company culture completely driven to anticipate customer needs and exceed their expectations. Our flexible engagement model enables our partnership to evolve with client needs.

WHAT IT PROBLEMS CAN WE HELP YOU SOLVE?

For over 20 years, System Soft Technologies has consistently selected the industry’s most talented and experienced professionals for our leadership team. 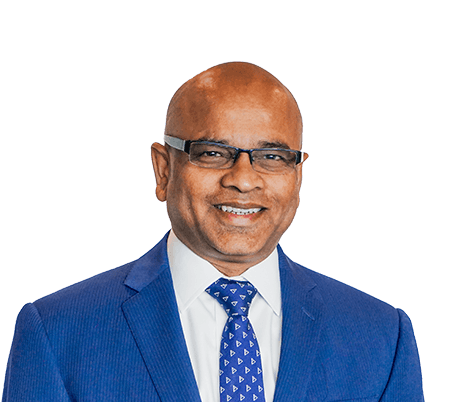 In 1999, Sreedhar Veeramachaneni, while working as an individual IT consultant for a banking institution, saw the need to form a single organization which could offer its clients full-life-cycle applications and staffing services to cover all their IT needs. Starting with a handful of people in Clearwater, Florida, he drove the company’s growth to over 800 employees and offices throughout the United States and India.

All along the way in this journey, Sreedhar focused on the elimination of middlemen in the IT staffing process in order to reduce the cost to the client, as well as drive profitability. The resulting gain in value for the dollar spent by the client became the foundation for System Soft Technologies’ success, both over the past sixteen years, and going into the future.

Mr. Veeramachaneni has been recognized by the National Republican Congressional Committee several times, including the Businessman of the Year award in 2003 and the Congressional Order of Merit in 2006. He holds a Bachelor’s of Science in Mechanical Engineering and is an avid bicyclist.

With over twenty-two years of experience in the IT industry, Ashok Yarlagadda joined System Soft Technologies in 2014 as Chief Information Officer, and is responsible for leading the solutions and products divisions.

In his role at System Soft, Mr. Yarlagadda has driven several critical technical and business initiatives. These include: designing industry-standard delivery methodologies with clear, demonstrable differentiators which help clients overcome their challenges and improve key performance indicators of their businesses; offering solutions that are perfectly suited for fast-changing technology trends; and fostering an enriched work culture under which the developer’s own motivation helps clients derive best value for their dollar. Innovation and uniqueness are his ideals, and he strives to ensure that these are embedded in all services and products offered by System Soft Technologies.

Prior to joining System Soft Technologies, Ashok spearheaded a large global delivery team at Capgemini Financial Services, where he lead business growth in Latin America from the ground up, and was directly responsible for customer experience worldwide. He accelerated the utilization of new, progressive delivery models which increased solution and products maturity, and also attained long-standing and successful business relationships with multiple clients for Capgemini with improved customer satisfaction.

Mr. Yarlagadda enjoys reading books, watching movies and playing volleyball during his spare time. He holds a Bachelor’s of Science in Computer Science and Engineering.

Eric Thacker joined System Soft Technologies in 2018 as VP of marketing for SSTech and our two product divisions, Elysium Analytics and Delphian Trading. As the first marketing hire, Eric aligns our offerings with customer pain points, built our marketing infrastructure, and designed our customer rewards program.

Eric has spent his 25-year marketing career focused on understanding individuals’ needs and then figuring out how technology can meet them. A long-time Silicon Valley professional, he has seen firsthand how these needs have evolved, usually at a pace faster than customers’ ability to adapt.

Eric has a BA in physics from Cornell University and MA in Economics and MBA from UC Berkeley Haas School of Business.

Before joining System Software, Mr. Abburi held multiple positions in Practice Management and Account Management at Wipro. Prior to that, he lead IT applications at American Tools, a Newell Rubbermaid company, where he greatly expanded the sphere of applications via delivery excellence models created under his leadership.

Venkat holds a Master’s of Science degree in Computer Science from Texas A&M Kingsville. His interests include reading and professional football.

David is the Director of Corporate Operations at System Soft Technologies. He brings proven experience to this role from his strong and varied business background in contracting, compliance, legal and accounting. David is responsible for driving business outcomes across the organizational spectrum and he implements and facilitates corporate initiatives with a steadfast commitment to core values and operational excellence.

At System Soft, David oversees functions in the following areas: Operations, Contracting and Accounts Receivable. In addition to overseeing daily operations, he is responsible for maintaining and enhancing interdepartmental coordination as well as crafting corporate messaging and correspondence to increase the understanding of corporate vision and business strategies among the company’s audiences, both internal and external.

Prior to System Soft, David was with CCS Medical for 11 years and Commonwealth Hotels for 7 years, having served in various leadership roles, such as Patient Support Manager and Property Accountant, respectively. Through his longstanding tenure with these organizations, he developed a Jack of all trades skill set that allows him to contribute in unique and versatile ways.

Andrew Vincent brings over 15 years of industry experience to his role as Creative Director at System Soft Technologies. The years of experience in the creative field led Andrew to have an appreciation for the diverse needs of businesses and the breadth of different industries.

Though his time has been spent wearing many hats, Andrew’s focus at SSTech is improving the user experience as well as managing the brand and online presence of corporate and government clients. While having a creative approach to his projects is imperative to Andrew, his passion goes beyond the artistic to introducing clients to the profitable possibilities of good design.

Andrew is a loving father & loyal husband who loves to build anything out of wood. His perfect evening would be having beers and BBQ with friends and family outback around the grill.

What IT challenges can we solve for you?

By expertly combining the right people, processes, and technologies, we enable customers to maximize business value and operational efficiencies. Let us help you